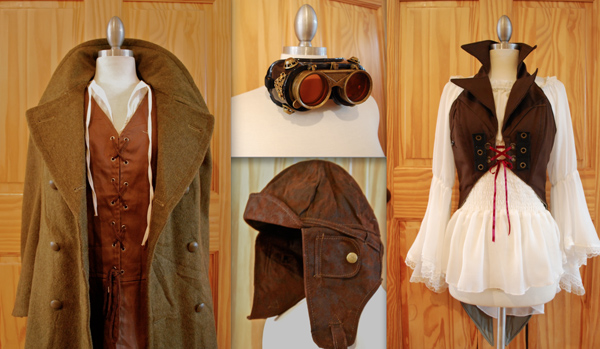 Victoriana of the future

One of the newer additions to the Halloween scene, Steampunk
is a look with big style and enormous potential for creativity.  Mad
Scientists, aeronauts, explorers, and inventors populate the Steampunk realm
which draws influences from both the Victorian era and the future. Think
top hats meets tesla coils.  For the truly diehard ‘punks, Red Light is
the only place you’ll find clothing actually FROM the Victorian era this Halloween.
Plus, we’ve got a serious selection of faux facial hair, and enough keys,
monocles, and antiquated accoutrements to leave you up to your ears in goggles
and gears! 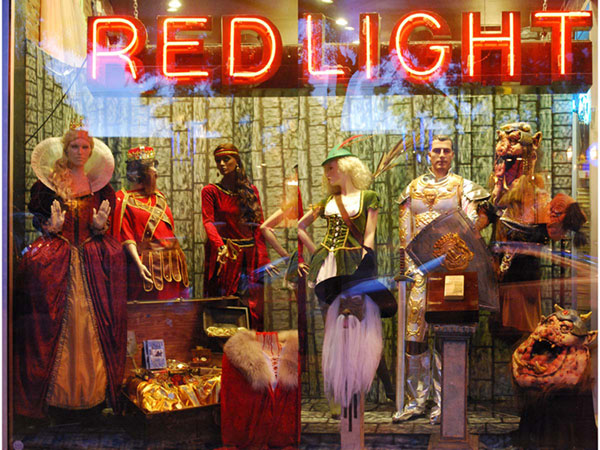 It used to be that Fantasy was a genre best loved in secret.
Nerd-dom and general geek-related ridicule awaited those who professed an interest in
knights, dragons, damsels and the like. In recent years, however, Fantasy has
come to dominate the public sphere. A bumper crop of  witches, wizards, and well-muscled,
blood-sucking teenagers have invaded our books and screens, each with
incredible popularity. Most recently, HBO premiered its gritty rendering of
George R.R. Martin’s Fantasy epic “Game of Thrones.” Martin’s world
is seedy and sinister, with delicious descriptions of all the sumptuous
medieval fashion. Doublets! Tunics! Corsets galore! And oh! The Jewels!!!

For my Halloween window I wanted to bring Martin’s world to life.
The discerning-eyed nerd will note a rendering of Queen Cersei, King Robert,
and a recently beheaded man who will, for spoiler purposes, go unnamed.

George R.R. Martin, of course, would not be where he is today were
it not for his predecessor, the founding father of Fantasy, J.R.R. Tolkien.
(What is it with the R.R.’s, right?) With that in mind I decided to use half of
my display to pay tribute to the Lord of the Rings. Aragorn is in his
battle-ready best, Lady Legolas is looking particularly leggy, and Gandalf’s
beard is simply out of this world. Plus there are some SERIOUSLY monstrous
monster masks that you’ll only find at Red Light Vintage & Costume!